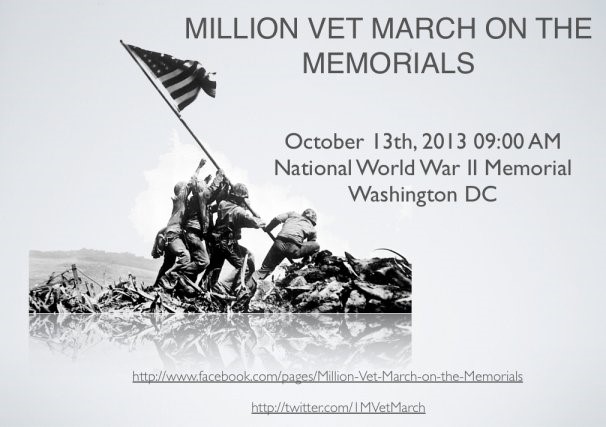 Via Before It’s News!!

One million Veterans are planning a walk on Washington DC to protest against this incredibly corrupt administration and how they are treating American vets since the US government shutdown began and what is happening to America. While Barack Obama has come out on the attack against US War Veterans, Americans are getting angry and getting organized. A going viral facebook page has been set up for the march, which coincidentally will be held on October 13th, 2013, the last day of a truckers shutdown America protest in DC as well. Two video reports about the march and protests also below.

A new rally is forming, “Million Vet March On The Memorials” that will be held 9am October 13, 2013 at the war memorials in Washington D.C.

The group is fed up with veterans being used as political pawns and are calling all patriots to attend, via their facebook page:

We are all military brats, current and former military spouses and some veterans. We cannot express how utterly disappointed we were that our Greatest Generation were being used as political pawns in the ongoing government shutdown and budget crisis. This should never be the case.

We do not care what political leanings you may be; be it liberal, conservative, Democrat, Republican, Libertarian, Independent or whatever. The actions of the U.S. government this week with regard to barricading and shutting down the World War II Memorial to veterans, that may or may not be on their last trip to Washington DC, is a despicable act of cowardice.

Veterans this week were unwillingly pitted as pawns in this crisis. We feel that this should never be the case. This is why we will go to Congress after the budget crisis and ask for a bill to be introduced that would prevent any member of the government from closing our memorials down to any American, except for maintenance purposes. In the meantime, we will have our March in Washington DC on October 13th! Our veterans deserve that!!

( Isaiah 26:4 KJV ) “TRUST Ye in the LORD For ever: For in the LORD JEHOVAH-YAHWEH is Everlasting Strength:”!!

( Ruth 2:12 KJV ) “The LORD Recompense thy Work, and a full Reward be Given thee of the LORD GOD of Israel, under whose WINGS thou art come to TRUST.”!!

( Psalms 68:4-5 KJV ) “Sing unto GOD, sing Praises to His Name: extol Him that rideth upon the Heavens by HIS Name JAH ( JEHOVAH-YAHWEH ), and Rejoice before HIM. A FATHER of the fatherless, and a Judge of the widows, is GOD in His Holy Habitation.”!!

Please Pray for the Holy Land of Israel-Yisrael and Our Judeo-Christian Nation USA and our Christian Earth, that CHRIST-MESSIAH JESUS-YESHUA CAME too SAVE Everyone!! “Pray Without Ceasing.” ( I Thessalonians 5:17 KJV )!!