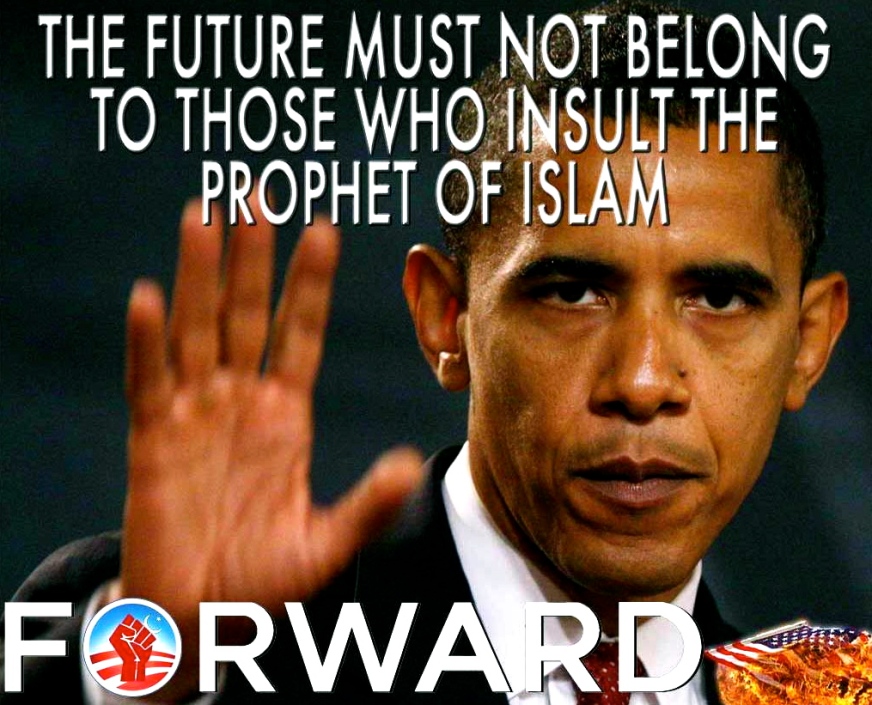 Via: Muslim Brotherhood Reaches The White-House!!

WASHINGTON — The Muslim Brotherhood appears on the ropes in Egypt following a military crackdown on the radical movement. Here in the United States, however, one American-Islamic group linked to the Brotherhood continues to thrive.

The Islamic Society of North America, or ISNA, will hold its 50th annual convention over Labor Day weekend this year.

And ISNA even has the ear of the White House!!

Before President Barack Obama departed for Israel earlier this year, he took time to consult with Mohamed Magid.

Magid has reportedly become a trusted administration advisor on issues ranging from immigration to counterterrorism policy.

White House officials have praised Magid’s organization, ISNA, as a pillar of the American-Muslim community.

But according to analyst Ryan Mauro of the Clarion Project, an organization dedicated to exposing radical Islam, ISNA’s agenda is anything but mainstream.

The Brotherhood gave birth to both al Qaeda and CAIR-HAMAS-ISIS!!

“It’s also easy to know what the Brotherhood’s agenda is because they told us in their own documents,” Mauro said. “They said their work in America is ‘a kind of grand jihad, in eliminating and destroying Western civilization from within.'”

“And most importantly, they say they want to do it at the hands not just of the believers- – the Muslim Brotherhood supporters — but at the hands of the unbelievers — us,” he said.

ISNA began in 1982 in Plainfield, Ind. A founding member, Sami al Arian, was convicted in a U.S. federal court of conspiring to support the terror group, Palestinian Islamic Jihad.

Despite its radical roots, ISNA has expanded from its heartland base to the power corridors of Washington, D.C.

“The remarkable thing is, many of these founders, who’ve been implicated in terrorism cases, named as unindicted co-conspirators in terrorism cases, are now consulting with the Obama administration,” investigative journalist Patrick Poole explained.

Poole, who writes for PJMedia.com, says ISNA’s founders were even given a tour of the White House in March 2013.

“When [the White House] was closed off to the American public, they were meeting with senior White House officials,” Poole said, “including the head of the Office of Public Engagement, who said ISNA was the primary Islamic group that the White House does their Muslim outreach through.”

It wasn’t long ago that the U.S. government had a far less positive view of ISNA. In 2007, federal prosecutors named the group as an unindicted co-conspirator in the largest terrorism financing trial in American history.

The focus of that trial was an organization called the Holy Land Foundation. Its leaders were convicted of funding the terror group Hamas.

“The Holy Land Foundation was spun off of ISNA,” Poole told CBN News. “And here we have the United States government going into federal court saying, ‘These are bad guys, they’re supporting terrorism, they’re a front for the Muslim Brotherhood.'”

“And then as soon as they leave federal court, ‘These are our outreach partners, these are the moderates, these are the people that we need to be dealing with,'” he said.

That outreach includes a role for ISNA in shaping America’s counter-terrorism policies.

Magid, who is the president of ISNA, is a member of a Homeland Security working group on “violent extremism.”

ISNA also participated in a 2012 review of FBI counter-terrorism training documents. The bureau agreed to purge documents that ISNA and other Muslim groups found offensive or “islamophobic.”

Poole says the fox is guarding the henhouse.

“We see a repeated pattern from FBI reports, from Department of Justice evidence in these terrorism trials, that groups like ISNA and other Muslim Brotherhood fronts, like CAIR-HAMAS-ISIS and the Muslim Public Affairs Council, that they’re here to Islamicize America,” he said.

ISNA did not respond to CBN News’ request for comment.

As for the Obama administration, its relationship with ISNA continues. Earlier this month, ISNA officials met with Secretary of State John Kerry to discuss the latest attempt at peace talks between Israel and the Palestinians.

It’s not just the White House where ISNA is making inroads. The group’s interfaith office works closely with Jewish and Christian groups around the country. One of its leaders even spoke at the National Prayer Breakfast earlier this year.

Do Not Trust Obama he is Evil!!   We NEED to IMPEACH Obama NOW!! Do Not Trust ISNA or CAIR, they both are Evil and Fronts for the Muslim Brotherhood in the United States Of America!!

SHAME ON OBAMANATION! IMPEACH him Now! Obama is Muslim! Muhammad was NOT PROPHET in God! Muhammad is Evil and he did this ~> Child Molester, Murderer, Thief, Liar, False Prophet, Married to 14 different women at the same time! Islam and Being a Muslim is Really EVIL!!!!