( Psalms 122:6-8 KJV ) “Pray for the Peace of Jerusalem: they shall Prosper that Love Thee. Peace be within thy walls, and Prosperity within thy palaces. For my brethren and companions’ sakes, I Will Now Say, Peace be Within Thee.”!!

( Joel 3:16-17 KJV ) “The LORD also shall roar out of Zion, and utter His Voice from Jerusalem; and the Heavens and the Earth shall shake: but the LORD will be  the hope of His people, and the strength of the children of Israel-Yisrael. So shall ye know that I AM  the LORD your GOD dwelling in Zion, My Holy mountain: then shall Jerusalem be Holy, and there shall no strangers pass through Her any more.”!!

This Sunday, Israel will celebrate Yom Yerushalayim, or Jerusalem Day. This celebration of the return of Jerusalem to the people of Israel reminds us never to forget the Holy City, sacred to Jews and Christians alike, and the capital of Jewish life for over 3,000 years!! 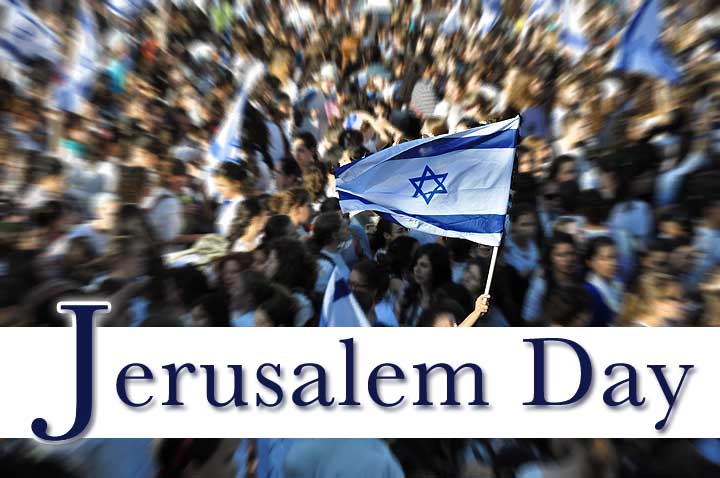 May 17 is Jerusalem Day, commemorating the liberation of the Holy City during the Six Day War in 1967. That year, Israel faced a terrible choice. She could wait for an invasion from the massed forces of several Arab countries that had declared their intention of destroying her, or fight back in self-defense. She chose to fight back. The resulting battle was a stunning victory that led to the reunification of Jerusalem under Israeli rule.

Since 1948, when Jordan responded to Israel’s declaration of independence by invading the West Bank and East Jerusalem, Jerusalem had been divided. Jews had been denied access to many religious sites, including the Western Wall, the holiest site in all Judaism. When Israeli troops came into East Jerusalem during 1967, they were reclaiming the city that had been their spiritual capital since biblical times.

The story of Jerusalem’s reunification is best told by those who experienced it. Today, I want to let one of those people speak. Yoske “Balagan” Schwartz, who came to Israel with his parents in 1932, was a member of an elite paratrooper unit in 1967. In The Jerusalem Post  he gave his account of that fateful time.

When his commanding officer said to him, “You the veterans will get a special prize…You will get to free the Western Wall,” Yoske’s place in one of the pivotal events in 20th century history was assured. But the “special prize” came at a high cost – a cost paid in Israeli blood. As Yoske puts it, “The Jordanian soldiers knew the place well, and were some of the best fighters I’d ever seen…They fought to the death. We fought for hours, and many died.”

When the Jordanian troops were finally beaten back, Yoske and his friends found themselves in an ironic situation. They were Jews, having to ask local residents for directions to the holiest place of their faith! “I remember that we were trying to get to the Western Wall and we didn’t know where it was,” he says. “With difficulty we found it. We didn’t know the place. We had to ask Arabs, ‘Where is the place that Jews used to cry to many years ago?’ One Arab said he would show us.”

Approaching the Western Wall – known in Hebrew as the Kotel– a fellow soldier asked, “Yoske, do you know what it cost us to get this back?” It is then that the impact of the battle began to sink in. Many of the men who fought bravely alongside Yoske had been killed. But Yoske would have little time to mourn or rest. Already his commanders were gathering him and his men to take them to northern Israel, where fighting was still raging with the Syrians. But before they left, Yoske and some of his friends found a moment to pray. It is a moment forever emblazoned in his memory.

“Forty years have passed and I still haven’t forgotten it,” he says. “I remember suddenly tens of thousands of Jews – young, old, men and women, were all running to the Western Wall, crying and hugging us and calling us heroes. We didn’t feel like heroes, but we cried and prayed with them…On the one hand, so many of my friends had been killed. But on the other hand, sitting in front of the Western Wall, I felt Jerusalem. I always say that I had once thought, ‘Who are these people with streimels and payot [ the fur hat and side curls worn by many Orthodox Jewish men ]? I’m not like them, I’m a new Israeli man.’ But when I got to the Kotel  I understood that I was just a Jew. It was an amazing feeling.”

It is because of the bravery of men like Yoske that people of all faiths may visit and worship freely in an undivided Jerusalem – a Jerusalem that is free precisely because it is under Israeli rule and governed by the democratic principles of religious freedom and personal liberty. The psalmist said, “If I forget you, Jerusalem, may my right hand forget its skill.” As we do every year at this time, let us resolve never to forget this ancient, holy city, sacred to Jews and Christians alike – the capital of Jewish life and culture for over 3,000 years. And let us continue to Pray for the Peace of Jerusalem!!

( Isaiah 62:1 KJV ) “For Zion’s sake will I not hold My Peace, and for Jerusalem’s sake I Will not rest, until the Righteousness thereof go forth as Brightness, and the Salvation thereof as a Lamp that  burneth.”!!

With Prayers for Shalom, Peace,

Our GOD’S NAME is HOLY / RIGHTEOUS / WORTHY / PEACEFUL / LOVING, land He is  HaShem -Yahweh – YHWH – Elohim – Hosanna – Jehovah – Emanuel – El Shaddai , and HE LOVES us through HIS SON Yeshua – Jesus Christ who is KING of kings, LORD ( ADONAI ) of lords, HE is the ALPHA and OMEGA, the FIRST and the LAST, HE is the BEGINNING and the END!!

( Isaiah 12:2 KJV ) “Behold, GOD is my Salvation; I Will TRUST, and not be afraid: for the LORD JEHOVAH is my Strength and my Song; HE also is Become my Salvation.”!!

( Psalms 68:4-5 KJV ) “Sing unto GOD, sing Praises to His Name: extol Him that rideth upon the Heavens by His Name JAH ( JEHOVAH-YAHWEH ), and Rejoice before Him. A Father of the fatherless, and a Judge of the widows, is GOD in His Holy Habitation.”!!

There is  Only ( ONE TRUE GOD  The FATHER ) / ONE SON ( Yeshua-Jesus Christ ) and ( ONE HOLY GHOST–HOLY SPIRIT ) PRAISE Them ALL as They’re THREE in ONE!!

( Genesis 12:2 KJV ) “And I Will Make of Thee a Great Nation, and I Will Bless thee ( Israel and USA ), and Make thy name great; and thou shalt be a Blessing:” May Our ONE TRUE GOD BLESS Israel-Yisrael / USA and our Christian Earth!!

Our ONE True GOD’S LOVE 💕💜 is ETERNAL THROUGH HIS SON Christ-MESSIAH Jesus-Yeshua for Today and Everyday Forevermore Everyone!!

IS KING of kings and LORD of lords, HE is the ALPHA and OMEGA, HE is the FIRST and the LAST, HE is the BEGINNING and END, HE is PRESIDENT of presidents, HE is our MESSIAH / SAVIOUR!! Glory Glory Hallelujah, Maranatha, and HE Loves